A tough guy breaks a window and sneaks into a high school at night, leading by the hand a timid, pretty blonde girl. He takes her to the darkened, secluded auditorium in Berryman High School. The girl seems nervous, with the guy reassuring her. They start to make out, until the girl becomes frightened and seeks aid from the guy, who assures her that they're alone. He approaches her, almost menacingly, but then she morphs into her vampire face and bites his neck.

Then, it is a new school day and Buffy is being shown around her new school by Principal Flutie. As he does so, he calls her by different names, none of which are her own. Buffy assures Flutie that there won't be any problems like at her old school and she is "Here to have fun. But I mean learning, fun with learning." Flutie tells Buffy not to worry, he thinks she will fit in just fine.

Meanwhile, Xander and Willow talk, and he asks her to help him with his homework; Willow agrees after being promised the reward of a shiny nickel. A jock asks Cordelia out to the Bronze and she declines him. Her companion, Harmony, confirms that they're still going. Cordelia asks who is playing that night and Harmony tells her it's Dingoes Ate My Baby. Cordelia surveys the group of her fellow students and mocks them one by one, until Xander interrupts. Cordelia ridicules him and leave, just as Buffy, looking through her bag and not paying attention to where she is going, bumps into Xander, causing her to drop her things. She gathers what she has dropped as Xander apologizes, and she asks him where the library is. He helps her out but when she leaves, he discovers she has forgotten the sharpened wooden stake she'd been carrying.

The library is deserted and Buffy attempts to leave, but bumps into Giles. She starts to ask him for some school books she needs, but Giles cuts her short and says he has what's she is looking for, and places a large book in front of her entitled Vampyr. Disturbed, Buffy tells Giles that's not whats she's looking for and hurries out, leaving a confused Giles behind. Buffy goes to class, but instead of paying attention, seems troubled by what had happened in the library.

The bell rings and Willow introduces herself to Buffy, offering, by request of Mr. Barnes, that she help Buffy get caught up. Willow is a bit unsure of herself when talking to Buffy but Buffy accepts her offer. While walking with Willow, Buffy asks about Giles. Willow tells her that he started a couple weeks ago, but before she can get too into detail about him, Cordelia, Harmony and a Cordette appear before them. Cordelia introduces herself as the welcoming committee and maneuvers Buffy away from Willow to join Cordy and her friends. The scene then shifts to Aphrodesia and Aura talking about Buffy in the girls' locker room. As Aphrodesia rants on about how Buffy got kicked out of her old school due to some kind of delinquent behavior, the body of the boy Darla killed the previous night falls out of her locker onto Aphrodesia, making her go into a screaming fit.

That night, Buffy meets Xander outside the Bronze and he tells her that Willow isn't there because she's at school with a new boyfriend. Buffy is suspicious and asks a lot of questions about this new boyfriend's appearance and when Xander mentions that he has a long-out-of-style "Lionel Richie" look, she runs off and Xander follows. Meanwhile, Willow is shyly hanging out with a blond guy. She tells him that she is still a little troubled about the dead guy, but he says that he got what he deserved for being alone in a secluded place with someone he barely knew. Willow turns to see that the blond guy has morphed into his vampire face. He grabs her and bites her neck. Meanwhile, Buffy and Xander have arrived at the school and they follow Willow's screams.

Buffy gives Xander her purse, saying he might need it, and then she charges in and tells the blond vampire biting Willow to get away from her. Buffy looks untroubled by the prospect of defeating the vampire, but then a bunch of other vampires appear, and Buffy gets nervous. She begins her attack, telling Xander and Willow to escape. Instead, Xander throws Buffy a broom that she can use as a wooden stake, and then he rushes to help Willow. He is grabbed by the blonde vampire from the previous night, and she starts biting him. Willow opens Buffy's purse and finds a large cross, which she uses to burn the vampire, seemingly killing her. Buffy dispatches the vampires, but when she announces she is the Slayer, one vampire runs away, though Buffy does kill the blond vampire who had attacked Willow. 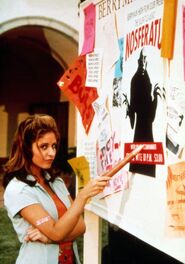 Retrieved from "https://buffy.fandom.com/wiki/Buffy_the_Vampire_Slayer_pilot?oldid=210516"
Community content is available under CC-BY-SA unless otherwise noted.