“Hits the body hard, like drinking a quart of alcohol, then eradicates the immune system.”
―Rupert Giles[src] 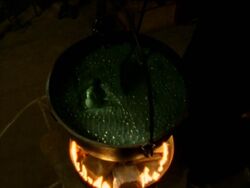 The Bloodstone Vengeance Spell was a spell meant to destroy an enemy. Initial symptoms were similar to the ingestion a large amount of alcohol, including euphoria and diminished motor coordination. Over the course of the next few hours, it slowly eradicated the target's immune system.

Once the spell has reached the critical point, it took two to three hours before it killed the victim, although it could be reversed before that time with the use of another spell.

Catherine Madison used this spell in an attempt to kill Buffy Summers without realizing that Buffy was the Slayer.

Retrieved from "https://buffy.fandom.com/wiki/Bloodstone_Vengeance_Spell?oldid=220137"
Community content is available under CC-BY-SA unless otherwise noted.