Billy the Vampire Slayer, Part One

Billy Lane was a vampire hunter inspired by Slayers[1] and an ally of the Scooby Gang.[2] Learning self-defense to cope with homophobic bullying in high school,[3] Billy eventually used those skills to protect his home town from the newly-emerging zompires.[1] Despite not having been called as a Slayer, as he was not female, Billy was accepted as an ally of the Slayer essence and was granted visions from the First Slayer.[4][2]

“When you find the family you're supposed to have, you know because they know when not to say anything.”
―Billy[src]

Billy grew up in the Californian town of Santa Rosita. As a teenager, he came out as gay; his parents subsequently kicked him out of his home and he went to live with his grandmother, Sky. His best friend at school was a girl named Katie and he developed a crush on a popular student, Devon, whom he and Katie privately referred to as "Cute Devon."[3]

Despite the support of Sky and Katie, Billy also suffered frequent bullying from fellow high school students Post and Garron, who mocked him for his sexuality and his parent's rejection of him. Sky suggested homeschooling, an option which Billy refused, believing he could handle the situation; instead, he started teaching himself to fight back, something his pacifist grandmother disapproved of. One morning, Devon discovered Billy training in the school gym, and the boys started talking for the first time.[3]

“What's the right way to fight back?”
―Billy Lane[src]

One night, while walking home from school, Billy was again confronted by Garron. As Billy prepared to fight back for the first time, Garron was killed from behind by Post, who had been turned into a zompire. He was quickly pulled to safety by Devon, who explained that vampires had become more feral in the wake of the end of magic. Devon also revealed his knowledge of Slayer mythology and, having witnessed Billy's self-defense training, suggested that Billy begin training as a pseudo-Slayer. Billy was initially skeptical of his own ability, but when Post managed to break into his room and attack them again, he successfully slayed his first vampire and saved Devon's life.[3]

Billy began training regularly under the guidance of Devon, who took on the unofficial role of Watcher to Billy. As the boys spent more time together, Katie began to realize that Devon was attracted to Billy, although Billy himself remained oblivious to this fact. As the true scale of the zompire threat became apparent, Devon began to have second thoughts about letting Billy put himself in such danger. However, when the local library where Sky volunteered was attacked by a pack of zompires, Billy defied Devon to go and rescue his grandmother. Not wanting Billy to go alone, Devon followed and finally admitted his feelings for him. The boys reconciled and worked together to fend off the zompires and save the civilians, including Sky; in the aftermath, Billy and Devon became an official couple.[1]

“The best way to fight back is to remember you are not fighting alone. Even when it seems you are.”
―Buffy welcomes Billy[src]

Some time later, Billy traveled to San Francisco and tracked down Buffy Summers, the former leader of the Slayer Organization.[1] Working beside the Scooby Gang, Buffy's supernatural-fighting team, Billy gained the opportunity to patrol and train with a real, experienced Slayer. Sky permitted her grandson to stay with Buffy on the condition that he Skype her after every patrol,[5] and he maintained a long-distance relationship with Devon.[6]

“The implication is that the combined spiritual force of all past Slayers — most often embodied in visions by The Primitive — has more agency than it once did. Men still cannot be Slayers outright. Billy does not share your strength or speed. But the essence of the Slayers has clearly accepted him as an ally.”
―Rupert Giles[src]

When the zompires grew out of control in his hometown, Billy returned to Santa Rosita to assist his friends; Anaheed accompanied him. Upon reuniting with his boyfriend, he and Billy's relationship suffered from a conversation Billy had shared with Buffy; the conversation had left Billy questioning whether he could fight side by side with his romantic interest and put other innocent lives before his or not. According to Buffy, it wasn't possible, and her opinion led to Billy "breaking up" with Devon, although their breakup was short lived, as Billy realized the error he'd made. He decided to go against Buffy's judgment and continue his relationship, no matter if they fought side by side.[4]

Together, Billy, Anaheed, Devon, Sky, and Katie managed to hold their ground against the zompires using fire, an idea which is given to Billy after suddenly receiving a vision apparently from the First Slayer, an occurrence which shocked both him and Anaheed, as Billy was not an actual Slayer.[4]

Shortly afterwards, Buffy and the other Scoobies arrived in Santa Rosita to help slaughter the remaining zompires. Billy worked alongside Anaheed and Devon to safely escort citizens to the safe zone outside the force field Willow had put around the city.[8]

Once the zompires had been completely slayed out of his town, Billy was present when the new form of vampires were revealed and Buffy was reunited with her Watcher, Rupert Giles. Giles, upon first hearing of Billy's vision from the First Slayer, assumed it was a delusion, as Billy was male and not an actual Slayer. However, he realized that he had gotten it all wrong when he noticed that the Vampyr book was rewriting itself with new rules for the newly restored magic, which explained why Billy received a vision from the First Slayer.[2]

Billy decided to stay in Santa Rosita, along with Devon and Anaheed, to help clean up the aftermath of their struggles against the zompires.[2] 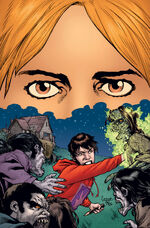 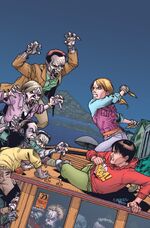 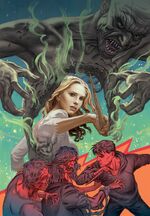