Bianca Jasmine Lawson (born March 20, 1979) is an American film and television actress. She is perhaps best known for her regular roles in the television series Saved by the Bell: The New Class, Goode Behavior, Pretty Little Liars, and Rogue. She has also had recurring roles in the series Sister, Sister, Buffy the Vampire Slayer, The Steve Harvey Show, Dawson's Creek, The Secret Life of the American Teenager, The Vampire Diaries, Teen Wolf, and Witches of East End. In 2016, Lawson began starring in the Oprah Winfrey Network drama series, Queen Sugar.

Lawson was born in Los Angeles, California to parents Denise and actor, Richard Lawson. She is also the great niece of Motown founder, Berry Gordy. She attended the Stella Adler Studio of Acting and graduated from Marymount High School. She went on to study film and psychology at University of Southern California.

Lawson began acting at the age of nine, appearing in commercials for Barbie and Revlon. In 1993, she was cast in Saved By The Bell: The New Class as series regular, Megan Jones. She also appeared in multiple episodes of Sister, Sister as Rhonda Coley and in The Steve Harvey Show as Rosalind. In 1996, she was cast in sitcom Goode Behavior as Bianca Goode which lasted just the one season.

In 1997, Lawson was cast as slayer Kendra Young in Buffy the Vampire Slayer, appearing in two episodes at the end of season two. In 1999, she appeared in WB's Dawson's Creek as Nikki Green.

In 2009, she was cast as Shawna in The Secret Life of the American Teenager. The same year saw her cast as witch Emily Bennett in CW's The Vampire Diaries. She portrayed Maya St. Germain in Pretty Little Liars.

Since 2012, Lawson has been a recurring character in MTV's series, Teen Wolf portraying Ms. Morell.

Her film roles to date include Primary Colors, Save The Last Dance, Bones and Breakin' All The Rules.

She has also leant her voice to 2011 video game, Star Wars: The Old Republic.

She appeared in that show from June 2010 through August 2012. Since 2012, she has had a recurring role as Ms. Morell in the MTV television series Teen Wolf, based on the original film from 1985. In 2014, Lawson had a recurring role as Eva in Witches of East End. In 2015, she was cast as series regular Talia Freeman in season three of Rogue. == Lawson has made appearances in two different television miniseries. In 1998, she appeared in The Temptations as Diana Ross (whom Lawson is related to through Ross's daughter Rhonda Ross Kendrick); and in 2001, she was cast as Anna Bella Monroe in Anne Rice's The Feast of All Saints. Some of Lawson's film credits to date include Primary Colors (1998), Save the Last Dance (2001), Bones (2001) and Breakin' All the Rules (2004).

Aside from film and television, Lawson provided her voice to the 2011 video game Star Wars: The Old Republic. 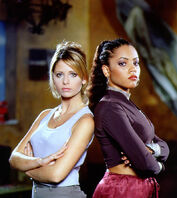 Retrieved from "https://buffy.fandom.com/wiki/Bianca_Lawson?oldid=192162"
Community content is available under CC-BY-SA unless otherwise noted.