"Bewitched, Bothered and Bewildered" is the sixteenth episode of the second season of Buffy the Vampire Slayer and the twenty-eighth in the series. Written by Marti Noxon and directed by James A. Contner, it was originally broadcast on February 10, 1998, on The WB network.

EVERYONE LOVES XANDER — When Cordelia succumbs to peer pressure and breaks off her tryst with Xander, on Valentine's Day, he convinces a witch to put a spell on Cordelia which will make her fall in love with him. But when the spell backfires, the women in Sunnydale, except Cordelia, and including Buffy and Drusilla begin to see Xander in a whole new light.[1]

It is the night before Valentine's Day, and Buffy and Xander are patrolling in Restfield Cemetery. Xander shows Buffy the heart-shaped locket that he has bought for Cordelia as a Valentine's gift. He wishes that dating was like slaying — "direct, to the heart, no muss, no fuss." Just then, a vampire rises from the ground, which Buffy disposes of quickly, before telling him that slaying is a little bit more dangerous than dating, which prompts Xander to remind her that she is not dating Cordelia.

On Valentine's Day, Cordelia finds herself ignored and rejected from her group of friends, mostly because she is dating Xander. Meanwhile, in class, he witnesses Amy, whom he knows is the daughter of a witch, bewitching Ms. Beakman into thinking she has handed in her homework. After the class ends, Xander tells Willow and Buffy what he saw. Considering witchcraft didn't turn out well for Amy's mom, Xander decides that he should talk to Amy and warn her about practicing witchcraft. Giles soon arrives to talk to Buffy, but the conversation turns awkward when Jenny runs into them. Jenny tells Giles that she needs to speak to him personally. Giles hesitantly brushes her off, and brings Buffy to the library. He warns Buffy that Angel has a long past of committing hideous and bloody acts "of affection" during Valentine's Day. Although he refuses to go into the details, he suggests she takes a break from patrolling until things cool down.

In the factory hide-out, Spike presents Drusilla with a pretty necklace for Valentine's. She seems half-heartedly pleased, until, Angel gives her his gift: a warm, freshly torn-out heart, which he found "in a quaint little shop-girl." Spike angrily tells Angel to focus more on the Slayer, to which Drusilla tells him not to worry. "Angel always knows what speaks to a girl's heart."

That night, while Buffy and Joyce watch television, there is a knock on the Summers' door. Buffy goes to answer, but finds no one there. Instead, Joyce finds a long black box at the back door meant for Buffy. She opens it, only to find the contents of the box is a dozen of red roses with the word "Soon!" written on a card. At the Bronze, Oz and his band, Dingoes Ate My Baby, are playing, and Willow happily watches her boyfriend play. Cordelia arrives, but her "friends" again rebuff her. Xander approaches a sad Cordelia, presenting her with her Valentine's gift, a heart necklace, and telling her that it may be just teenage hormones that's driving their relationship, or it may be more than that. Cordelia is at first impressed and joyful with the gift, but quickly tells Xander that she wants to break up, because "we don't fit." Xander, agitated, walks off, leaving Cordelia looking sorry and unhappy.

The next day, Xander finds himself the school loser having not only being dumped but having it happen on Valentine's Day. He tries to talk to Buffy, but she is preoccupied with Angel's visit and brushes him off. Xander then confronts Amy about his knowledge of her magic and then proceeds to blackmail her into casting a love spell for him. Amy reminds him that love spells have to be pure, and Xander tells her that the love spell is "pure" hateful vengeance. To complete the love spell, Xander needs something that belongs to Cordelia, so he quickly asks her for the necklace back. Cordelia pretends that she hated it and has been keeping it in her locker, when actually she was wearing it under her clothes. The two then snipe at each other before Xander leaves. That night, Xander and Amy perform the spell.

Xander then approaches Cordelia the next day, confident that the spell took effect. To his dismay, Cordelia remains the same — harsh and bitter. Meanwhile, Giles and Buffy are researching more on Angel's Valentine traits, per her request, when Xander enters. Giles goes off to get more books, leaving them together. Surprisingly, Buffy starts to flirt with a thoroughly confused yet eager Xander. Amy arrives thereafter, and asks to talk to Xander privately. She tells Xander that the spell didn't work, but soon starts to seduce Xander too, much in the same manner as Buffy did. Xander then realizes that the spell has gone awry — especially when one of the Cordettes appear to be hitting on him.

Startled, Xander returns home, only to find a half-dressed Willow under his sheets. Willow expresses a desire for them to sleep together, attempting to seduce Xander. He stutters a mild warning not to do this, and Willow simply licks his ear in response. Having had enough, Xander quickly scampers off back to Sunnydale High School. Apparently, the spell has worked on all the women in Sunnydale except for Cordelia. Xander goes to the library and recounts everything to Giles, asking for help. Giles seems disbelieving at first, until Jenny arrives to apologize for her deceit in regards to Angel but gets distracted by Xander's muscles. Giles stresses how irresponsible and serious Xander's stunt was, telling him that women under the thrall of a love spell can be deadly. Dragging a reluctant Jenny behind him, Giles leaves the library to look for Amy. He tells Xander to barricade himself inside the room.

The plan doesn't work, as Xander barricade the inside of the doors forgetting that they open outwards. Buffy arrives in a short leather trench coat and heels, continuing her quest to seduce Xander. Even so, he decides not to take advantage of the situation, and politely asks Buffy to back off. Suddenly, Amy turns up and, claiming Xander loves her, she and Buffy get into a fight. Xander can only watch helplessly. Then, Amy performs a spell and turns Buffy into a rat. Giles and Jenny return, and while Jenny and Amy glare at each other — with Amy almost turning Jenny into a rat as well — the two men try to capture the Buffy-rat. The situation gets even worse when Oz shows up and punches Xander in the face for rejecting Willow the night before, as she was on the phone with him all night, crying. The distraction leads the Buffy-rat to escape into the basement. Giles angrily tells Xander to go home before he does any more damage, and asks Oz to help him look for Buffy-rat.

Xander regretfully leaves, only to find Cordelia getting beaten up by Harmony and a group of girls in the hallway, as retribution for hurting the new object of their affections. Xander rescues her and they leave the school together. As they walk outside, they are confronted by an army of Sunnydale ladies, led by an axe-wielding, grief-stricken Willow. As she starts toward him with the axe, Harmony and her friends soon catch up with them. The two groups fight: one looking to hurt Xander, and the other looking to protect him. The girls are distracted enough for Cordelia and Xander to escape to Buffy's house, much to Joyce's delight, as she is also in love with Xander. She sends Cordelia away to get bandages for Xander's wounds, and uses the alone time to flirt with him. Back in the library, Giles enlists Amy and Jenny's help to reverse the spell, but neither of them want to do anything other than chase after Xander. Jenny manages to flee to find Xander. Amy begins to see reason, and aids Giles in the rescue. Meanwhile, Oz looks for Buffy-rat in the basement, as it approaches a cat and a mousetrap.

Cordelia returns and locks Joyce out of her own house to keep her away from her "boyfriend… former." Joyce persists, though, and she breaks the window to let herself back inside. The two run up to Buffy's room and barricade themselves inside. Angel comes and pulls Xander out through Buffy's open window with the intention to kill him as a Valentine's Day gift for Buffy. Just before he's able to, however, Angel is blindsided. Xander initially thinks Buffy has arrived, but his savior is actually Drusilla, who has also fallen under the love spell. Angel is confused as to why she saved him, but Drusilla tells her sire that she's finally found a real man, and announces her plan to turn Xander into a vampire. Before she sires Xander, the two are besieged by the mob of women and separated. Willow is about to cut Xander's head off, but is stopped by Cordelia. She and Xander are able to flee into the house and attempt to block the front door. Drusilla knocks the back door off its hinges, allowing more women to enter, but Drusilla is unable to enter herself, as she has never been invited inside. Xander and Cordelia have to run again when Joyce arrives with a knife to kill Xander to stop anyone else from having him, and they take refuge in the basement. Xander inadvertently reveals that the spell was for Cordelia, which seemingly touches her. Just then, the women break through the basement door.

Just as the dangerous mob advances towards them, Giles and Amy manage to reverse her spells, and everybody was soon cured from the thrall. The girls look around, startled and confused. Cordelia quickly explains that they had all took part in an overzealous scavenger hunt. Meanwhile, down in the boiler room, Oz finds a very much human Buffy very much naked. He awkwardly asks her to stay while he gets some clothes.

The next day, everything returns to normal although Willow refuses to talk to Xander. Buffy thanks Xander for not taking advantage of her while she was under the thrall, and tells him that he'll likely need to grovel to Willow. Cordelia is back with her snobby posse, but this time, after they humiliate Xander again, she dumps them, and proceed to walk arm-in-arm with Xander, rekindling their relationship. 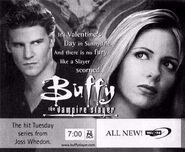 "It's Valentine's Day in Sunnydale. And there's no fury like a Slayer scorned."