"Beneath You" is the second episode of the seventh season of Buffy the Vampire Slayer and the 124th in the series. Written by Douglas Petrie and directed by Nick Marck, it was originally broadcast on October 1, 2002 on the UPN network.

FROM BENEATH YOU, IT DEVOURS — There's a giant worm on the loose in Sunnydale, and Spike's back to help (or maybe it's to hinder). Willow prepares to head home from England, though reluctantly. Buffy starts her new job at Sunnydale High, Xander is having trouble getting back onto the dating scene, and Anya's back to her old vengeance game.[1]

In Frankfurt, Germany, a young girl races down the deserted corridors above a nightclub, pursued by hooded figures. She dashes through an exterior door, proceeding to scale down the building. Unable to escape, she is stabbed by one of the figures. She cries out in pain and the assassins depart. Dead, the girl rolls to the side and says in a deep voice: "From beneath you, it devours."

Dawn awakens Buffy from the nightmare and Buffy questions the meaning of her dream. Elsewhere in Sunnydale, something large tears through the ground. Spike sneaks around in the basement of Sunnydale High, seemingly headed for a rat while he talks to himself. Everything around him begins to shake and he falls to the ground, screaming.

In the next morning, Xander drives Buffy and Dawn to school and they talk about high school and Xander's relationship problems. At Sunnydale High, Principal Wood introduces Buffy to her new job and shows her the cubicle where she'll be working. She sneaks down to the basement in search of Spike but doesn't find him.

In England, Willow struggles with the need to return to Sunnydale where she'll be forced to face her friends and the trouble she caused. A taxi awaits her as Giles listens to her verbalize her fears and he convinces her that even if her friends don't want her back, her presence on the Hellmouth will be important. Back in Sunnydale, a woman walks her small dog along the sidewalk, but while her back is turned, something sucks the dog through the pavement and into the ground. She runs away and right into Xander, who takes her to the safety of Buffy's house.

The remaining Scooby Gang console the woman, Nancy, and promise to deal with the creature. Much to everyone's surprise, a cleaned up version of Spike joins them in the living room and offers his assistance in the battle. Spike wants to talk with Buffy, but Dawn and Xander are not happy to see him or with the fact that Buffy didn't inform them that she saw Spike earlier. Buffy goes to talk with Spike privately and he offers to help deal with this underground monster. Buffy eventually agrees to let him help, then explains the game plan to the rest of the group. As Spike leaves with Buffy for patrol, Dawn leaves him with a parting threat that if he ever again harms or touches Buffy, Dawn will set him on fire while he sleeps.

Outside, Buffy and Spike examining the scene where the dog was eaten. Spike explains that the manifest spirits from the school were the cause of his craziness. Buffy is noticeably uncomfortable around him in the wake of his attempted rape, so he says that he won't bother apologizing for what he did, just admits to changing. Meanwhile, Xander takes Nancy home and she asks if they can go out sometime. The ground rumbles and a giant worm chases them down a hallway and emerges from the ground with a roar. Once the giant worm goes away and the two are safe, Nancy starts to talk about her ex-boyfriend and Xander quickly concludes that she made a wish to a vengeance demon.

Buffy and the gang confront Anya at the Bronze and get her to admit to making Nancy's ex-boyfriend Ronnie into a Sluggoth demon. Anya realizes Spike has a soul, but Spike tries to stop her from spilling the news to the rest of the group. He starts to attack Anya and she turns on him, with her vengeance demon powers of strength. Buffy steps in and beats up on Spike while he instead hits her back with a verbal assault taunting her about their past sexual relationship. The fight sends Nancy on the run alone, but her wormy ex-boyfriend is on her trail. Meanwhile, Xander tries to convince Anya to reverse the curse on Ronnie, but it's not something she can do easily.

Buffy arrives in time to rescue Nancy from the demon, but Spike intervenes, hitting it with a metal pole. He goes to stab the worm only to have it turn back into human form an instant before Spike makes contact, so the chip sets off as he stabs Ronnie in the shoulder, making them both scream in pain. Spike freaks out and talks crazy again, while Buffy calls the paramedics to help Ronnie. She notices when Spike says that "from beneath you, it devours" before running away. Anya and Xander arrive on the scene and Anya knows she will pay a steep price for reversing the spell.

Buffy goes after Spike and finds him in a church. He's confused and speaks in metaphors of what he really is to Buffy; he tried to act like his usual self, but it was a costume and didn't work. He concludes that she's there to use him like she did before, so he unbuckles his belt telling her that it's time to service her. She attempts to stop him and throws him across the room. He tries to explain what he did to get the missing piece that would allow him to become what she wanted. He mutters that Angel should have warned him about "the spark" burning inside him, and with this Buffy understands he's talking about his soul. Spike continues to speak of all the voices that are in his head telling him to go to hell. Buffy, still shocked, asks him why would he do this. Spike explains that he did what he could to be a kind of man, and hopes to be forgiven and loved. Spike turns to a large cross and drapes himself onto it, letting it burn his skin. Buffy tears as she looks on him. Spike asks her if they can rest now.

Xander: "I forgot high school's unwritten rules of hallway etiquette. Of course, no one ever explained them to me. They'd just stuff me in a locker till I drew my own conclusion."

Spike: "I was the enemy, then I was nothing, and now I'm God's garbage, not even a joke, less than, less than, less than all His creatures combined so tell me, dear Buffy..." [Buffy lets him approach, unmoving, but not letting go of that stake, either. He barely makes it to her — and SLAMS straight down, to his knees. And opens his arms wide.] "How ya like me now?"[3] 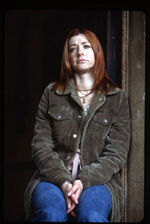 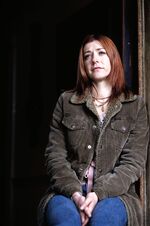 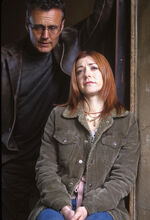