"Beer Bad" is the fifth episode of the fourth season of Buffy the Vampire Slayer and the sixty-first episode in the series. Written by Tracey Forbes and directed by David Solomon, it was originally broadcast on November 2, 1999 on The WB network.

ANOTHER ALE FOR MY FRIEND — When Buffy is befriended by a group of upperclassmen who convince her to drown her sorrows with them, bartender Xander becomes suspicious when Buffy and her new friends return to their primordial roots. Back at The Bronze, Willow is aware of Oz's attention being turned to a new performer, the sexual and charismatic Veruca.[1]

Buffy is still hurting because Parker dumped her after a one-night stand. During Professor Walsh's class on the role of the id, Buffy daydreams that she saves Parker's life and he swears to do anything to get her back.

Xander meets Buffy and Willow at a table on campus and tells them he used Xander a fake ID to get a job as a bartender at a college pub. He practices holding out a lighter to light a phantom cigarette and asking them about their day. Buffy tells him that bartending is more than just lighting cigarettes and talking to girls; he has to actually mix drinks. Xander says he's fine since he's seen the movie Cocktail. He asks the girls if they're going to stop by that night. Willow has a date with Oz at the Bronze, while Buffy answers she might.

Buffy stops by the pub and sees Parker entertaining a girl at one of the booths. She bumps into Riley, who gives her the lowdown on Parker's womanizing habits. Buffy sits by the bar, where Xander is having some difficulty getting into the groove of the job. Buffy tells him what she's learned about Parker. She turns to leave after seeing Parker walking by, but a group of college boys insists that she joins them drinking some beer.

Meanwhile, Oz and Willow are in the Bronze together, but he is focused on the singer Veruca when she gets on the stage with her band Shy. Willow asks Oz if he knows Veruca and he tells he knows her drummer.

The next morning, Willow is complaining to herself about Veruca having called her a "groupie" when Oz introduced them. When she enters her dorm, she sees Buffy watching TV up close and talking about how pretty the colors are. Willow assumes that she slept with Parker again, but Buffy tells her that there were four guys, shocking Willow. Buffy starts to explain and Willow understands that Buffy just meant that she was drinking beer with four guys, not that she slept with all of them. Willow, saying that Buffy shouldn't be drowning her sorrows in alcohol, says Parker deserves to be killed by spider bites. Buffy agrees and starts to leave, but Willow stops her and tells her she needs to get dressed first. Confused, Buffy looks down and realizes she's still in her pajamas.

During her psych class, Professor Walsh talks about what they're going to go over in their next class. She talks about the reading assignment for the next class and starts to explain why it'll matter, but Buffy interrupts by raising her hand. Professor Walsh calls on her and she blurts out that Willow has already done the reading. Willow and the rest of the class look at Buffy strangely. Professor Walsh says that, because of that, Willow will have some time on her hands. Buffy sees a girl in front of her eating a sandwich; she then grabs it from the girl and starts eating it. Shocked, Willow asks her if she's okay, and Buffy says she is and asks why she wouldn't be.

Someone wearing a glove turns on a drip from the tubes of a chemical lab. The liquid mixture is dripping into a keg of Black Frost beer. That evening, Buffy is again drinking with the same guys as the previous night. They act more idiotic as they drink. Meanwhile, a pretty girl is at the bar under the circumstances Xander's been practicing for, but he isn't paying attention because he's too busy watching Buffy. She starts to talk about how bad her day's been, then asks for a light. Xander holds up a "no smoking" sign to her.

Oz stops by to see Willow and asks why he hasn't been able to get ahold of her. She says she's been busy. He tells her that Shy is playing at the Bronze again and asks if she wants to go. She makes up an excuse and walks away, leaving a confused Oz behind.

Xander sends Buffy home because of her stupidity. She says she wants more beer and Xander tells her she's cut off. She tells him that "beer good," but Xander tells her "beer bad" and pushes her out the door, telling her to go home. Her four drinking buddies realize she's gone and ask: "where girl?" but continue drinking. One of them leaves to go to the bathroom and soon emerges as a violent Neanderthal. He rushes at Xander and knocks him out. Xander wakes up to the Neanderthal leaning over him and the other three students cowering on the other side of the room. The Neanderthal yells and the other three are overcome with violent convulsions. Backs hunch over, brows thicken, arms grow longer and more muscular, voices deepen, and hair becomes long all over their bodies. The four Neanderthals surround Xander, who chases them away with his lighter. The four Neanderthals are now loose on the streets of Sunnydale.

Xander runs to find Jack, the owner of the pub, who tells him that he deliberately changed the beer as revenge for twenty years of college kids taunting him. Jack tells Xander that his brother-in-law is a warlock and showed him how to do it. Xander is upset that he served the beer to Buffy, but Jack says it doesn't matter because it'll wear off in a day or so. Xander gets Giles to help, who is upset at Xander for serving Buffy. When they find her in her dorm, she's drawing on the wall and saying "Parker bad!" Giles and Xander are unable to keep Buffy in her room when she gets a craving for more beer.

Meanwhile, Willow confronts Parker about what he has done to Buffy. He talks about his good intentions and puts his hand on hers, just to Willow reveal that his charm didn't work on her. She rants about how primitive men are — just when the four Neanderthal students burst into the room. They knock Willow and Parker unconscious and start a fire that rapidly burns out of control. Outside, Xander catches up with Buffy and they rush to help when they see smoke.

Though afraid of the flames and unable to figure out how to use an extinguisher, Buffy saves Willow and — after hitting him — Parker. Outside, Parker thanks Buffy for saving his life and apologizes to her. She then knocks him unconscious by hitting him with her club again. 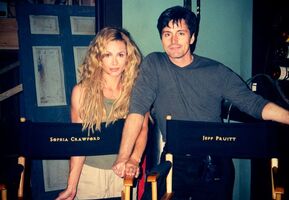