"Bargaining, Part One" is the season premiere of the sixth season of Buffy the Vampire Slayer, and is the one hundred first in the series. Written by Marti Noxon and directed by David Grossman, it originally broadcast on October 2, 2001 on UPN.

Buffy's friends try to cope with Buffy's death and are left to defend Sunnydale without her. Meanwhile a gang of marauding demons threaten to jeopardize their plan to bring the slayer back from the dead. To complicate matters, Giles contemplates leaving Sunnydale to come to terms with the loss.

The Scoobies patrol in the absence of the Slayer, who has been dead for five months. Willow and her growing powers lead the efforts and the gang with telepathy and other magic from a perch on top of a crypt. The gang are helped by the Buffybot, who helps the group slay several vampires — and helps keep Buffy's death a secret from both the regular and the supernatural world. Willow has tried to make the robot behave more normally, but her tuning never really goes quite as planned. Although the Buffybot is doing its job fine, it also serves as a painful reminder of the friend they've lost.

The next morning, Willow and Tara — who have moved into Buffy's house and are secretly acting as Dawn's guardians— prepare for the day, getting Dawn ready for school as Dawn prepares to take a phone call from her father who they are also trying to keep Buffy's death a secret from. At one point, the Buffybot, acting on its programming, hugs Dawn creating an awkward and uncomfortable moment, knowing that the robot is a pale imitation of the real Buffy. The Buffybot is sent to attend Parent's Day at Dawn's school. She behaves oddly, but the other parents hear her comments in Ms. Lefcourt's class as expressing concerns similar to their own and the Buffybot doesn't draw any suspicion. At the Magic Box, Giles and Anya are going over paperwork; however, Anya is angry at Giles, since he has announced his intention to return to England and leave her in charge of the store, but has yet to go through with it leading to an argument. Xander arrives, and defuses the situation before taking Anya aside, as she admits that she wants to announce their engagement to the gang, but Xander doesn't want to go through with it while everything is still 'up in the air' in regards to the issue that they're discussing with Willow and Tara that evening.

That night, Spike stays with Dawn while the rest of the gang have a meeting. Dawn suggests that Spike can leave, but he steadfastly refuses, still feeling guilty that his failure to protect Dawn lead to Buffy's death. The two then start a card game. The Buffybot hunts a vampire but gets hit with a bottle and her motion skills are impaired. The vampire realizes the Slayer is a robot and quickly leaves.

Anya has found — on eBay of all places — the last Urn of Osiris. Willow's pleased and announces their plans to bring back Buffy the next night. Xander, Anya and Tara are all feeling unsure that bringing Buffy back to life is the right thing to do, as something could go wrong. Willow insists, however, and stresses that Giles, Spike, and Dawn cannot know, and that because Buffy was killed by mystical energy, they have a chance of bringing her back. She then tells the others of her worry that Buffy is suffering eternal torment in a hell dimension like Angel did and refuses to leave her there, and this makes them promise their support.

Willow returns home to find Spike keeping a wounded Buffybot out of trouble, the Buffybot having been programmed to return to Willow if damaged. Spike angrily leaves when the Buffybot innocently compliments him on his physique — a programming remnant from her sexbot days — and Buffybot confides in Willow about Spike's constant shame in her presence. Without her real sister, Dawn tries to find comfort from the Buffybot but doesn't get much. The next day, Giles engages the Buffybot in training to make sure she's ok after being damaged. He also attempts to get her to practice her breathing and to release her 'chi', but Anya points out that teaching this to a robot is pointless. Giles realizes he's trying to teach the Buffybot as if she were human, and the Buffybot responds that 'every Slayer needs her Watcher'. Giles notes that, like any good Watcher, he got his slayer killed in the line of duty and that all slayer-watcher relationships end the same way, and now his job is done. The Buffybot innocently asks why Giles is still there, and Giles finds himself unable to come up with a reason.

At a demon biker bar, the vampire that hit the Buffybot with a bottle brags about it to several Hellions — a gang of biker demons. Although the Hellions are uninterested at first as the vampire embellishes the story, he gets them interested when he mentions that the slayer is a robot. The leader of the Hellions, Razor, decides that the gang is going to head to and trash Sunnydale. The vampire suggests that he be allowed to join as thanks for passing on the information, only for Razor to behead him with his bare hands before the gang departs.

In a forest glade, Willow invokes Adonai during a summoning spell and a baby deer approaches her. She suddenly stabs it in the throat, collecting its blood for the resurrecting spell. She returns to the Magic Box, claiming she got the Vino de Madre from the black market.

The gang finds a note from Giles, stating that he's already left and isn't one for goodbyes. Not about to accept a silent escape, the Scooby Gang tracks him down at Sunnydale Airport and he gets a proper farewell with presents, signs, balloons, and tears. After Giles departs, Willow, Xander, Anya and Tara return home for final preparations and then head to the cemetery. They prepare the ritual, sitting around Buffy's grave and Willow begins the spell. While performing the spell, Willow's skin is cut by invisible blades, large insects appear to crawl underneath her skin, and a large snake is produced from her mouth, but Tara insists that they can't stop.

Meanwhile, Spike is watching Dawn when the demon bikers arrive ready to tear Sunnydale apart. Spike recognizes the Hellions and knows they would never have come to Sunnydale if they didn't think it was vulnerable, meaning they know that there's no Slayer. Buffybot comes across the gang and tries to stop them but the leader, Razor, wounds her and she runs away to find Willow. The bikers following her reach the cemetery and interrupt Willow's spell by breaking the Urn of Osiris and scattering the gang's circle. One of the bikers tries to take Anya away, but Tara uses magic to get her back. Xander tells Willow that the spell didn't work, and the two continue to run.

Beneath the ground, however, mystical energy surrounds Buffy's decaying body which then fully restores it and returns the confused and frightened Slayer to life inside her coffin. 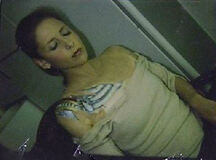 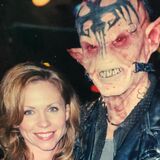 "Buffy lives."
Add a photo to this gallery

Retrieved from "https://buffy.fandom.com/wiki/Bargaining,_Part_One?oldid=211740"
Community content is available under CC-BY-SA unless otherwise noted.