"Band Candy" is the sixth episode of the third season of Buffy the Vampire Slayer and the fortieth episode in the series. Written by Jane Espenson and directed by Michael Lange, it originally broadcast on November 10, 1998 on The WB network.

CHILDREN UNLEASHED — Buffy is forced to grow up even faster when Mister Trick executes a devious plot to render the town defenseless by causing Sunnydale's adult population to inexplicably behave as irresponsible adolescents. Meanwhile, Buffy struggles to keep Angel's return and recovery a secret while her mom and Giles conspire to schedule her 24 hours a day.[1]

Buffy combines her slaying with studying for the SAT in the cemetery with Giles. At school the next day, Buffy tells Willow and Oz of a test-related nightmare. Oz offers to help her study and Willow brags about how smart Oz is. Buffy tells them Giles and her Mom have her scheduled 24/7 to keep her out of trouble. They find Principal Snyder in the cafeteria handing out boxes of Milkbar chocolates, which they are forced to sell to pay for band uniforms.

Meanwhile, at Sunnydale City Hall, Mayor Wilkins speaks to Mr. Trick about a tribute he needs to make to a demon. Trick assures his boss that the matter is well in hand, as he has hired an outside contractor who has caused trouble in Sunnydale before.

Buffy sells half of her candy to her mom, and Buffy tries to convince her mom to let her get her driver's license. Joyce refuses, at least in part because she is worried that if Buffy has a license, she might leave again and not come back. Buffy then leaves for the library, telling her mother that Giles is making her practice all night. She sells the other half of her candy quota to Giles, and leaves, telling Giles her mother is making her go home. Instead, Buffy visits Angel, bringing him blood. He is quickly getting better and is practicing Tai Ch'i. He asks her about Scott, but she doesn't tell him they've broken up. When she arrives home, Buffy finds her mother and Giles waiting, angry at her lies. They send her to bed and proceed to munch on the chocolate bars.

The next day, Giles fails to show up for study hall, and Xander and Willow secretly play footsie under the table. Worried, Buffy goes to Giles's place and finds her mom sitting on the couch. Giles explains that they are rescheduling her activities to lessen her burden, and Joyce gives Buffy her car keys and tells her to drive herself home. After a surprised Buffy leaves, they conspiratorially hope she's not noticed anything amiss, and then Giles lights up a cigarette and Joyce pulls out a bottle of Kahlua she had quickly hidden when Buffy arrived.

Giles, now "Ripper," offers to take Joyce out for some fun while Buffy decides to go with Willow to the Bronze, despite the SAT exam being the next day. Buffy frightens Willow with her crazy driving. At the Bronze, Buffy and Willow discover the place now packed with adults who are acting like teenagers, including Principal Snyder, Mrs. Bartrum, and Willow's shirtless, stage-diving doctor. Snyder starts following Buffy and Willow, who take off, along with Oz, to find out what's going on — they've noticed the manic eating of band candy, and suspect that it is causing adults to act like teenagers, with all the attendant irresponsibility, lust, and emotionality. Oz initially isn't too worried, assuming that even as a teenager Giles would still be responsible. Buffy and Willow, however, know better and tell him that rather than being responsible Giles was an out-of-control dark magic user.

Trick checks up on Ethan Rayne, the "outside contractor," and the production of the chocolate bars, then leaves to perform the "tribute."

Meanwhile, Joyce notices a coat in the window of the Dot vintage store, and Ripper shatters it to steal the coat. The ensuing alarm attracts a cop, who Giles beats unconscious. They steal his gun, cuffs, and cruiser. He and Joyce start making out on the hood of the police car.

Buffy gets into a car accident and damages her mom's car. Snyder knows the factory where the candy came from, so Buffy sends her friends to the library to do research just before finding her mother and Giles kissing in the middle of the street. Buffy tries to reason with her mother, with no luck. She enters the factory, taking Joyce along; Giles and Snyder follow. Inside, Buffy finds Ethan and catches him. Her fist persuades Ethan to give up all that he knows. Trick needs to dull Sunnydale adults in order to take the tribute for Lurconis.

Meanwhile, four vampires enter an unguarded hospital to remove four newborn babies. The Scoobies' research reveals that the demon Lurconis eats babies, and Giles remembers that the demon may be found in the sewers.

Buffy, Giles and Joyce crash the party in the sewer, and the Mayor flees unnoticed. Buffy defeats the vampires while Giles and Joyce rescue the babies. Trick escapes and the demon appears. Buffy pulls down a gas pipe, igniting it, forming a jet of fire with which she attacks and kills Lurconis.

Later, the Mayor and Mister Trick discuss the debacle. Although the Mayor isn't happy, he is placated when Trick points out that now there's one less demon he needs to pay tribute to. Despite this, the Mayor warns Trick not to do him any more favors.

The next day, the adults have returned to their senses. Snyder promptly chooses Willow, Oz, Xander, and Cordelia as "volunteers" to clean up the mess in the hall. Buffy complains to Giles about the SATs. They meet Joyce, but Buffy fails to notice their awkwardness upon seeing each other.

Buffy: "I love that you guys love torches." 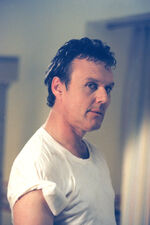 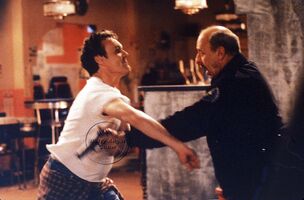 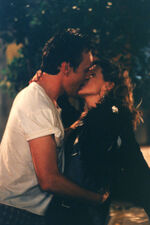 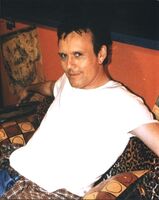 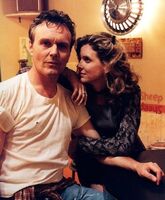 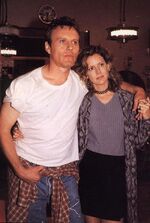 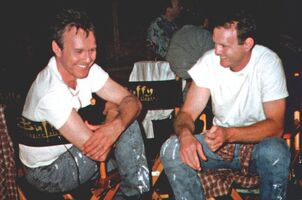 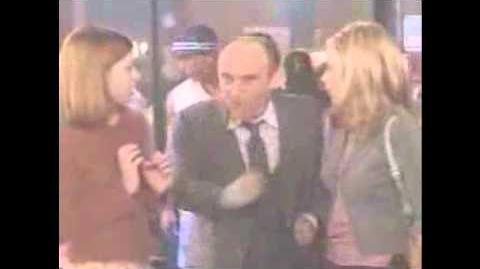 "Tonight, infants are vanishing as a deadly lullaby rocks Sunnydale."