"Bad Girls" is the fourteenth episode of the third season of Buffy the Vampire Slayer and the forty-eighth episode in the series. Written by Douglas Petrie and directed by Michael Lange, it was originally broadcast on February 9, 1999, on The WB network.

TAKE A WALK ON THE WILD SIDE — A taste of the wild life leaves Buffy wanting more, and while Sunnydale is being inhabited by a long-dead demon and his vampire minions, Buffy follows Faith into her irresponsible world of reckless slaying abandon. Meanwhile, Giles fights to maintain his sanity in the face of the pompous and stuffy new watcher, while Willow, Xander and Oz ponder their options for life after high school.[1]

While patrolling, Faith asks Buffy if she's ever had sex with Xander, and Buffy says they're just friends. They slay a vampire wielding a short blade and long blade. The swords are stolen by Mr. Trick and given to the Mayor. The Mayor discusses his next plans which include a dedication.

The next day at school, the gang are discussing college and their future plans. Willow has received early acceptance from colleges and academies all the over the world while Xander, on the other hand, isn't expecting any acceptances early or otherwise. Buffy leaves to report to Giles in the library, and Willow tells Buffy that Giles was wanting to see her anyway. Inside, Giles is in the company of Wesley Wyndam-Pryce, Buffy and Faith's new Watcher and it's obvious that the man is stuffy, pompous and full of himself. Buffy reminds him that the last Watcher who turned up was evil, but Wesley assures her that, unlike Mrs. Post his credentials have been checked by Giles, although Buffy is still extremely unimpressed by him. She tells the two about the vampire that was bearing swords, and Wesley recognizes as being him from the El Eliminati, a vampire cult that worshiped the demon Balthazar before he was killed.

Now Wesley believes the vampires are looking for Balthazar's amulet, which was reported to give him strength, so he orders Buffy to get the amulet from the crypt from which it was buried. Buffy doesn't enjoy being given orders. Faith walks in and upon learning who Wesley is, walks back out. Buffy tries to get her to come back. When Faith expresses to Buffy her belief that as the Slayers, they can do what they want, and enjoy it, Buffy is skeptical. But Faith believes Buffy gets off on slaying as much as she does.

That night, Buffy finds the amulet but a group of Balthazar's vamps enter before she can take it. Faith arrives and the two slay some of the vamps before retrieving the amulet. After handing over the amulet to Wesley, Buffy leaves to her classroom to take a chemistry test, but she can't stop telling Willow and Xander about the previous night and how much she ended up enjoying it. Faith shows up at the window and she and Buffy leave to destroy a vampire nest. The two go dancing afterwards at the Bronze, where Buffy meets up with Angel. She's acting very strange and he tries to ignore it and tells her that Balthazar isn't dead and he's looking for his amulet. When Wesley comes looking for Buffy, she takes the amulet from him and gives it to Angel.

Buffy and Faith go out and find Balthazar, an obese and ugly demon that must live in a large pool of water and constantly be kept wet, since only his amulet would give him the strength to stand up again. At a loss for weapons against a large group of vampires, they break into Meyer Sport & Tackle. Faith continues to expound on her philosophy of being a Slayer to Buffy. "Life as a Slayer is very simple. Want, take, have" while helping herself to items. Buffy, continuing to be swept away by Faith's brazen recklessness, also steals some weapons. The police arrive and arrest them, but in the car, the two Slayers kick down the metal grate separating them from the cops, causing the car to crash and the cops to be (mildly) injured. The following morning, Buffy checks the local newspaper for any news regarding the accident, but finds nothing. Mayor Wilkins is attacked by one of Balthazar's vampires, who is captured by Trick.

Balthazar demands his minions bring him the Watchers and kill the Slayers. No matter the cost, he must have his amulet. The enemy who crippled him is about to gain ultimate power and he refuses to let this come to pass. Willow presents Buffy with a protection spell and is ready to go slaying that night, but Buffy tells her that it's too dangerous and that she's going with Faith instead. This leaves Willow feeling hurt. The two run into several vampires and stake them. Then Allan Finch, the deputy mayor walks out and Faith accidentally stakes him, too. He dies before anything can be done and both Slayers flee the scene of the crime in separate directions. Buffy runs into Angel and he tells her about Balthazar taking Giles while Faith returns to the scene where Allan is.

With the two Watchers in his possession, Balthazar searches for answers as to who has his amulet. Wesley is willing to give up anything in exchange for his life, exposing his cowardly nature in the face of actual danger. Angel shows up with Buffy, frees Giles and everyone fights. When Balthazar captures Angel, Buffy electrocutes him. With his dying breath, Balthazar warns them of his enemy. "When he rises, you'll wish I'd killed you all."

In his office that night, the Mayor performs the ritual of Dedication then has Trick release the vampire. Trick is confused, but does what he is ordered. The vampire emerges and cuts straight through the Mayor's head — only for it to instantly heal. Trick stakes the vampire and the Mayor declares that the hundred days before the ascension has begun, and until that time he is totally invincible. In celebration, he suggests going out for a root beer.

Buffy goes to see Faith the next day wanting to talk about what happened, but Faith isn't bothered about what happened, revealing that she's already weighted and dumped Allan's body. Buffy is horrified and tells Faith that getting rid of the body doesn't make the problem go away. Buffy tries to make Faith face the reality that she killed someone, but Faith tells Buffy that she simply doesn't care, leaving Buffy speechless.

Willow: "But, I've done this sort of thing before. Like a million times. And, if my parents hadn't settled on 'Danielle,' Danger would be my middle name, and besides... Minty fresh protection. So?"

Buffy: "I know you think you can handle this. And you've gotten used to being on your own. You've got your tough loner act down pretty well." 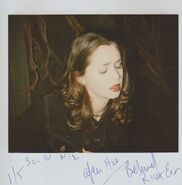 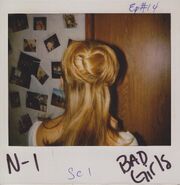 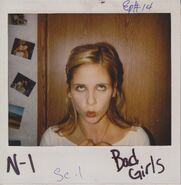 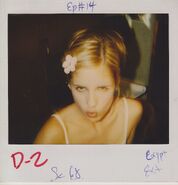 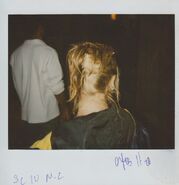 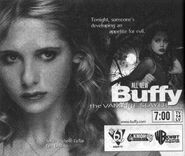