"Anne" is the season premiere of the third season of Buffy the Vampire Slayer television show, and the thirty-fifth episode in the series. Written and directed by Joss Whedon, it originally broadcast on September 29, 1998 on The WB network.

WHERE NOBODY KNOWS YOUR NAME — Trying to escape who she is, Buffy finds herself in a city far from home where she is forced to once again face her destiny to battle a demonic force threatening inner-city kids living on the streets. Back in Sunnydale at the onset of senior year, Willow, Xander, Cordelia and Oz try to keep the vampire population in check without getting themselves killed, while Giles searches for leads on Buffy's whereabouts.[1]

In a cemetery in Sunnydale, lacking a Slayer, the Scooby Gang has tried to temporarily take her place. They attempt to slay Andrew Hoelich, a newly risen vampire, but they are very uncoordinated and weak. They discuss Buffy's absence and Willow wonders if Buffy knows school starts the next day. Meanwhile, Buffy is on the beach and Angel finds her and wraps her in his arms. They embrace and he tells her, "I'll never leave. Not even if you kill me." Then, Buffy wakes up. She has taken up residence in Los Angeles where she is living in a tiny apartment and working as a waitress at a diner, Helen's Kitchen.

The next day, school starts in Sunnydale. Willow is disappointed when Oz tells her that he will be repeating his senior year of high school, since he didn't graduate and didn't go to summer school. She doesn't know what to think about it. Giles continues his search to find Buffy, following all the leads he has, only to be disappointed by them. Xander and Cordelia, having been away from each other all summer long, are each separately looking forward to seeing one another. But when they meet, they feel awkward and say only a few words to each other, and walk away angrily.

While working in Helen's Kitchen, Buffy encounters homeless teens Lily and Rickie. They're looking for a meal for the minor change they have, having spent all of their money getting matching name tattoos that together make a heart. After recognizing the girl as vampire-wannabe Chantarelle, Buffy leaves the diner, claiming to not feel well, and heads to her apartment where she just sits, staring at a can of food. Later, she roams the streets in search of solidarity, and passes an elderly homeless woman slumped in a doorway saying "I'm no one." In Sunnydale, Giles gets a lead on Buffy's location after hearing reports of a girl fighting vampires in Oakland and quickly gets ready to catch the next flight to check it out. Xander and Willow remind him this isn't the first time he thinks he's found Buffy, but Giles is determined to try and leave. Willow asks Xander if there's any chance Giles might actually find her. Xander believes Buffy will only show up when she's actually ready to show up.

That night, Lily finds Buffy on the street and they discuss their previous lives in Sunnydale. Lily asks Buffy if she has any money and if she wants to go to a rave. Buffy says she wants to be alone, but is willing to give Lily the money to go spend with Rickie. An old man walks past them, in a daze, saying "I'm no one." Then, he stops in the middle of the street as an oncoming car drives towards him. Buffy rushes out to him and pushes him out of the way, only to be hit by the car herself. People gather around her and try to call for help, but she claims to be fine and runs off. She runs into a guy named Ken, who's passing out fliers about a teen shelter, Family Home, and accidentally knocks all of his fliers to the ground. As they pick them up, he tries to make friends with her and get her to visit the home. She declines, claiming she is just fine.

Xander, Willow and Oz mope at the Bronze, listening to the music of Bellylove and talking about how terrible their slaying technique is. Xander suggests they use Cordelia as vampire bait.

Giles returns from his unsuccessful trip (it turns out there weren't even any vampires in Oakland) to talk to Joyce. She's afraid to leave the house in case Buffy calls or shows up. Giles tries to comfort her and tells her not to blame herself. She doesn't, instead blaming him for taking her little girl away and having a secret life with her.

Lily goes to Buffy the next day, telling her that Rickie is gone and she's worried that something bad might have happened. They go to the blood bank, where Lily and Rickie have donated before, to see if they have seen Rickie. The doctor, Joan, tells them she hasn't seen him, and Buffy leaves with Lily to continue their search. Buffy finds the elderly man she had saved on the street, dead, having drunk drain cleaner. She notices he has Rickie's distinctive tattoo on his arm. It is, in fact, Rickie, but he looks as if he's had the life drained out of him.

When Buffy tells Lily, she doesn't take it very well, accusing Buffy of bringing a monster with her that caused this. Lily runs out. When she hits the streets, Ken finds her and convinces her into coming to the family home, telling her that Rickie is already there. Late at night at the blood bank, Buffy goes searching through the files, attempting to find out what happened to Rickie. She notices that many of the patients' files say "candidate" on them. The woman who runs the bank shows up, and after Buffy coerces her, she says that she just gives the names of the healthy ones to "him."

Meanwhile, Ken has gotten Lily to change clothes for the "cleansing" and leads her into another room, where he tells her to enter a strange, dirty pool of water. At the front door of Family Home, Buffy tries to enter undercover. When that doesn't work, she kicks down the door and finds Ken with Lily over the water. However, it's too late for Lily, as the "pool" is actually a portal. Buffy and Ken fight, Buffy trying to save her friend. Instead, both fall through the black pool and into another dimension where time flows at a different rate. Ken reveals himself as a demon of some sort with a human face glued on, and sends his guards after the girls. The two are quickly caught and told that they will be living there for as long as they can serve as useful slaves. In this dimension time runs differently: a century passes in their dimension, but only a day on Earth. Slaves who are too old to work are returned to their former dimension to die on the streets. Buffy then realizes that this is what happened to Rickie. They have been chosen because they're "no one"—there is nobody to miss them or notice their absence. Buffy says she wasn't chosen, but Ken tells her that it doesn't matter, because he knows who she is — she's Anne, a runaway anxious to get lost and hide in the shadows.

At the Hammersmith Park, Cordelia complains about being chosen as the bait. Oz checks to make sure everyone is "packing" with stakes and crosses, and they move toward their hiding spots. Cordelia follows Xander, attempting to tell him that she didn't miss him over the summer, and accuses him of having a summer fling. Suddenly, a vampire comes up from behind Willow and attacks her, interrupting Xander and Cordelia's quarrel. Oz knocks the vampire off and attempts to stake it, but is thrown off. Xander tries to kill it, and Cordelia tackles the vampire, all three go falling onto the ground. Cordelia's stake impales the vampire in the back, leaving her on top of Xander. The two kiss passionately.

The new slaves are being inducted into their life in the new dimension. A demon berates them and tells them that they don't matter. He insists that they say "I'm no one" when asked who they are. When it is Buffy's turn, she introduces herself sarcastically and starts a fight with the guards. After many rounds, she is stopped when Ken holds Lily at knife point. Pushing Lily behind him, Ken launches into a speech, giving Lily the perfect opportunity to push him off the platform. Buffy tries to escape with all the others through a large iron gate. Ken catches up with her as she moves past the gate, and pushes her through. The gate falls, and he gets his calves impaled by the gate's stakes. Buffy smashes his head in, impersonating a version of Gandhi "if he was really pissed." After the others are safely above ground, the black pool vanishes, leaving an empty, tiled basin behind.

After leaving Lily her identity as "Anne," complete with an apartment and job at Helen's Kitchen, Buffy heads back to Sunnydale. Back at home, Buffy's mom hears a knock on the door, and opens it to find her daughter. After a few moments, they hug.

Willow: "Oh! That reminds me. I asked around about Andrew Hoelich, our gymnastic vampire, and apparently he used to like to hang out in Hammersmith Park and pick up grilles! Or, okay, that could be girls." 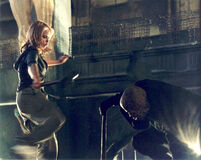 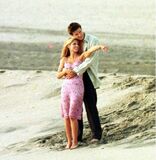 "She's lost her one true love. She's left behind her only friends. But she can't escape her destiny."