01:47
This article is about the comic meta-series. For other uses, see Angel.

Angel comics may refer to one of two closely related terms:

In 2005, after the Angel television series had already ended, IDW Publishing took up the rights to the Angel license and began publishing several miniseries and one-shots, some of which were set after the Angel series finale "Not Fade Away". The work of one of the writers of these miniseries, Brian Lynch, impressed Joss Whedon so much, that they collaborated on the a canonical seventeen-issue continuation of the television series, After the Fall,[2] which disregarded the continuity of their previous continuations. IDW Publishing chose to continue the Angel series beyond the initial seventeen issues, although the canonicity of these later issues is uncertain. Furthermore, several spin-off miniseries and one-shots were also created.

In 2019, the 20th Century Fox-owned publishing house Boom! Studios picked up the license of the comics from Dark Horse, debuting in the same year the Angel ongoing series, spin-off to the Buffy the Vampire Slayer reimagining series. It was renamed Angel + Spike from the ninth issue on, then cancelled at its seventeenth issue. 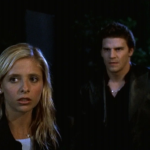 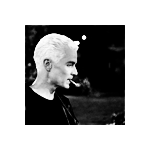