Andrew Hallett was the actor who portrayed Krevlornswath "Lorne" of the Deathwok Clan on the Angel television series. In 2004, he was nominated for a Satellite Award as "Best Supporting Actor in a Series, Miniseries, or Television Film" for this role.

Hallet was originally the personal assistant of Joss Whedon's wife, Kai Cole. However, after Whedon saw Hallett singing in a Universal City Blues revue, he conceived the character of the Host, the anagogic demon who reads people when they open up through singing karaoke. Hallett was invited to try out and got the part, his first job ever as an actor. Andy has enjoyed working on the series Angel and has been known to help his fellow cast mates out with their own karaoke singing.[1]

Hallett got his agent after he appeared on Angel. Pat Brady spotted him singing and acting in the second season premiere episode. The morning after the show was broadcast, she called up the series casting agent and asked about him. He signed with her shortly after.[1]

During the run of Angel, Hallett appeared in two other small productions: The Enforcers (2001), a TV miniseries directed by Angel writer Mere Smith; and Chance (2002), a film directed and starred by Buffy actress Amber Benson, also featuring James Marsters. In 2005, he voice acted as the Cricket in the animated film Geppetto's Secret.

A month after the Angel series finale, Hallett suffered a dental infection that spread to his heart and caused a five-day hospitalization for cardiomyopathy. The infection weakened his heart's muscle and valves, causing severe fatigue and three additional hospitalizations over the next five years.[2] He died of heart failure on March 29, 2009 at Cedars-Sinai Hospital in Los Angeles, with his father Dave Hallett by his side.[3]

The graphic novel Lorne: The Music of the Spheres was published in 2010 as a tribute to Hallett, as well as a "final send-off" for his character.[4] Since then, Lorne was not featured in any story from the comic continuity: "the loss of Andy Hallett was still too painful."[5]

Hallett initially had an uncredited role as an UC Sunnydale student on Buffy the Vampire Slayer. He then guest starred as the friendly demon Lorne for 33 Angel episodes, special guest starred in 13, then joined the main cast for the remaining 31 episodes of the series.

Hallett behind the scenes for Angel. 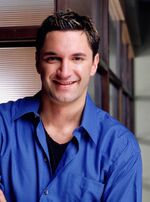 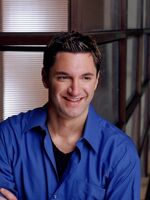 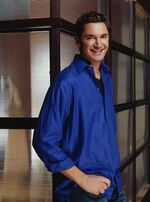 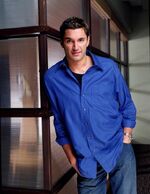 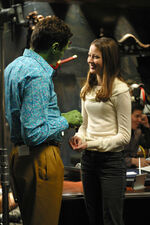