“Oh, hello, there, gentle viewers. You caught me catching up on an old favorite. It's wonderful to get lost in a story, isn't it? Adventure and heroics and discovery—don't they just take you away? Come with me now, if you will, gentle viewers. Join me on a new voyage of the mind. A little tale I like to call: Buffy, Slayer of the Vampyrs.”
―Andrew Wells[src]

Andrew Wells was a reformed supervillain and Watcher in the Slayer Organization. Tucker's brother, Andrew left Sunnydale High with a proficiency in demon summoning and founded the supervillain group the Trio with Warren Mears and Jonathan Levinson. After a year spent as a hostage of the Scooby Gang, Andrew became their friend and ally, eventually training as a Watcher to the newly-activated Slayer army.

Andrew: “I've had some experience with bullies. Growing up.”
Buffy: “Yes. I suppose you did.”
— Andrew tells Buffy about his childhood.[src]

Andrew Wells grew up in Sunnydale and was the younger brother of Tucker Wells.[1] Not much is known about his family life, although it has been implied that his aunt was his legal guardian.[2] A nerd, Andrew was the victim of much bullying growing up, but was friends with fellow outcasts Warren Mears and Jonathan Levinson at Sunnydale High.[3] Inspired by his older brother, Andrew learned to summon and control demons, and sent a pack of flying monkey demons to attack the school's production of Romeo and Juliet, apparently for no other reason than to amuse himself. His plans were presumably stopped by the Slayer, Buffy Summers and her demon-fighting friends, the Scooby Gang. Although the Scoobies quickly forgot the incident, Andrew, Warren, and Jonathan went on to remember it fondly.[1] Buffy later foiled Tucker's plans when he trained a pack of hellhounds to attack the senior prom because he couldn't find a date.[4]

Andrew: “I summoned the flying monkeys that attacked the high school? During the school play, you know?”
Warren: “It's Tucker's brother.”
— Andrew's high school achievements are not remembered by the Scooby Gang.[src]

Approximately two years after Sunnydale High's destruction, Andrew, Warren and Jonathan formed the Trio, a supervillain group dedicated to taking over Sunnydale. Together, they engaged in petty crime, such as robbing banks,[1] and museums.[5] Andrew was a crucial member of the group, since many of their endeavors relied upon his ability to summon and control various demons. Since Buffy was the protector of Sunnydale, the Trio secretly tested her abilities to collect information; Andrew's test involved three demons to attack her at her temporary job.[6] The Trio began to fall apart after they used the Cerebral Dampener on Warren's ex-girlfriend Katrina Silber to turn her into a willing sex slave; Katrina came to her senses and accused them of rape, so Warren killed her to stop her from leaving. Andrew helped cover up the murder by summoning a trio of Rwasundi Demons and was impressed when they got away with it.[7] Buffy, however, figured out their involvement and began to investigate their activities further; Andrew set a Glarghk Guhl Kashmas’nik Demon on her to make her experience intense hallucinations.[8] Warren and Andrew began plotting together against Jonathan, hoping to rob an amusement park and let him take the blame. Their plan was stopped by Buffy, and Warren left Andrew to be arrested with Jonathan. In his frustration at Buffy, Warren accidentially murdered Tara Maclay;[2] Tara's vengeful girlfriend and powerful witch Willow Rosenberg hunted him down and skinned him alive.[9] She planned a similar fate for Andrew and Jonathan, but the Scooby Gang managed to protect them long enough for them to flee to Mexico.[10][11]

“Here's the thing. I killed my best friend. There's a big fight coming, and I don't know what's going to happen. I don't even think I'm going to live through it. That's, uh, probably the way it should be. I guess I'm...”
―Andrew accepts responsibility for murdering Jonathan.[src]

While living in Mexico with Jonathan, Andrew was approached by the First Evil, who, in the guise of Warren, convinced him to open the Seal of Danzalthar underneath the rebuilt Sunnydale High.[12] Returning to Sunnydale, Andrew murdered Jonathan in an attempt to open the seal,[13] but was soon discovered and held hostage in Buffy's house by the Scooby Gang.[14] At first, the Scoobies were openly hostile towards Andrew, partially because he murdered Jonathan and partially because of his annoying habits. Nevertheless, he tried to make himself useful around the house by replacing Buffy's broken microwave,[15] baking, and keeping a "big board" tracking the First's plans.[16] Eventually, he began to document the Scoobies' adventures for future generations using a video camera. Although Xander, Anya, Spike, and Dawn were all happy to let him interview them, Buffy was angered by his attempt to turn everything into a story and forced him to finally face up to the seriousness of his actions. Andrew finally accepted responsibility for Jonathan's murder, and his tears of remorse put an end to the supernatural chaos caused by the Seal of Danzalthar.[12] Hoping for redemption, he joined the Scoobies in the Battle at the Hellmouth, where he was partnered with Anya against an army of Turok-Han Vampires and Bringers. Andrew himself was shocked and confused when he survived the brutal fight, and comforted Xander over Anya's death by telling him she died saving his life.[17]

“You're not the only one who's changed. Mr. Giles has been training me. I'm faster, stronger, and 82% more manly than the last time we—”
―Andrew to Spike[src]

Having earned the trust and friendship of the Scooby Gang, Andrew remained with them as they formed a global organization which located and trained the thousands of Slayers recently activated by Willow. He and Violet starred in television recruitment adverts.[18] Andrew received training as a Watcher under the wing of Rupert Giles,[19] and was granted his own Slayer squad in Rome.[20] When Angel encountered a psychotic Slayer named Dana, Andrew was dispatched to the Los Angeles branch of Wolfram & Hart to handle the situation, where he was excited to reunite with thought-dead ally Spike. Dana was eventually taken down by Wesley Wyndam-Pryce, but when Angel tried to take her back to W&H, Andrew asserted that she belonged with the other Slayers, informing Angel that the Scooby Gang no longer considered Angel trustworthy due to his takeover of Wolfram & Hart, and that he was under direct orders from Buffy herself to bring Dana back with him by any means necessary. Respecting Buffy's orders, Angel relented and allowed Andrew to leave with Dana.[19] Months later, Angel and Spike tried to track Buffy to Rome and found Andrew instead; Buffy's true location was now a secret and a decoy Slayer had been set up in Rome. As a joke, Andrew told the two vampires that "Buffy" was dating the Immortal, an old rival of theirs.[21]

Rona transferred rebellious Slayer Simone Doffler to Andrew's squad in Rome, feeling that she would benefit from a less urban setting. Andrew and Simone were not a compatible match, disagreeing over whether Slayers should use guns, and she eventually went rogue.[22][20] During a mission to Tokyo, Andrew used his knowledge of Japanese monster movies to direct a giant-sized Dawn in battle against her mecha counterpart, a moment he claimed to have been preparing for his whole life.[23] When Soledad was activated as a Slayer, Andrew was sent to recruit her, but she was turned off by Buffy's pitch.[24] When Andrew located Nisha, one of Simone's lieutenants, outside of Milan, he and Buffy went on a mission to retrieve her. They rescued her from the nest of a Ragna Demon, which Nisha revealed had been created by Andrew, who bred the extinct species back into existence to capture Simone. Buffy and Andrew finally confronted Simone, who demanded a trade: Andrew for the Ragna Demon. Simone explained that she wanted revenge on Andrew for his authority and annoying habits, but Buffy refused to give up her friend. Andrew's Slayer squad showed up to rescue their Watcher, and Buffy later forgave Andrew for creating the Ragna, reaffirming that he was a member of the Scooby family.[3]

Andrew: “But you were right. I lied to you.”
Buffy: “Yeah, you're part of the family. Get used to screwing up for good reasons. It's what we do.”
— Buffy reaffirms Andrew's place in the Scoobies[src]

“Well, you know what homophobia really means about you, don't you?”
―Warren teases Andrew[src]

Andrew appeared sometimes to be a closeted homosexual, expressing subtle attraction to various other males. He has fantasized about male actors Scott Bakula,[15] Patrick Swayze, [14] and Viggo Mortensen.[19] In keeping with LGBT stereotypes, his top choices from the Slayers under his command in were his "best dressed" Slayers, not his best fighters.[25] Once, surrounded by countless Slayers playing strip poker in their underwear, an oblivious Andrew told Xander that he would be "bored stiff".[26]

Complicating Andrew's sexuality, Andrew once lectured both Spike and Angel about dating and women and was seen leaving for the opera in James Bond-style attire with two attractive women, referring to them as his dates.[21] He was also noticeably upset when Warren refused to make him a robot copy of Christina Ricci and stated that Scully from X-Files "wants me so bad".[6] If Andrew was gay, he appeared to be quite closeted about it; when Buffy tried to bond with him over a mutual appreciation of Daniel Craig's swimming trunks, he quickly evaded the topic.[3]

“You've never had any tiny bit of sex, have you?”
―Xander to Andrew[src]

While Andrew was frequently immature and inexperienced, and has never been in a romantic relationship, he perhaps unknowingly did harbor a number of crushes.

In January 2008, gay men's website AfterElton.com awarded Andrew the status as the tenth best gay or bisexual character in modern science fiction, despite commenting upon the textual ambiguity of Andrew's sexual orientation.[31]

In an interview with The Advocate magazine, Joss Whedon confirmed Andrew's hinted homosexuality, stating that it was inspired by actor Tom Lenk:

"Tom has a bit of a fey thing going on in his persona that, you know, you can't really deny. When I first looked at his audition tape, I said "OK, he, uh, he seems kinda gay. Do we want to make that decision [about the character]? There's no reason why he couldn't be, so, great, let's pick the funniest actor." [...] The character became very charming in his complete lack of awareness about, among other things, his own sexuality."[32] 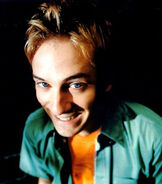 Retrieved from "https://buffy.fandom.com/wiki/Andrew_Wells?oldid=40424"
Community content is available under CC-BY-SA unless otherwise noted.