"Amends" is the tenth episode of the third season of Buffy the Vampire Slayer, and is the forty-fourth episode in the series. It was written and directed by Joss Whedon. It was originally broadcast on December 15, 1998.

As Christmas comes to Sunnydale, Angel is tormented by the ancient force known as the First Evil, who poses as Angelus' past victims in an attempt to force him to kill Buffy.

A man named Daniel runs down a Dublin street in the early 1800s, afraid of something or someone. He finally stops to rest in the entrance to an alley when the man following him, Angelus, appears in front of him. Apparently, Daniel had gambling problems and was in debt to Angelus, so he decided to take his payment "his way." Before he kills Daniel, he tells him to be of good cheer, because after all, "It's Christmas!"

When Angel wakes up from his nightmare, unable to fall back asleep, he walks the streets of Sunnydale and runs into Buffy, who is out shopping for gifts. They exchange a few awkward words before Angel sees the ghost of Daniel staring at him. The next day, as Sunnydale High starts winding down for Christmas vacation, Buffy tells her friends about her freaky encounter with Angel. They start filling each other in on holiday plans when Oz shows up, ready to talk to Willow. He tells her that he knows that she and Xander have a history and how he doesn't know if things between the two will ever be over. However, he also tells her tells her he misses her terribly, so he is willing to give their relationship another shot. Cordelia, on the other hand, is still cold and hostile toward the Scooby Gang, and smugly tells them that she'll be going to Aspen "with real snow."

Buffy and her Mom go shopping for a Christmas tree and decide to invite Faith to Christmas Eve dinner. When Buffy suggests inviting Giles, Joyce becomes uncomfortable and immediately vetoes the idea, claiming he doesn't want to spend Christmas with a "bunch of girls." While at the lot, Buffy spots a bunch of trees that died, seemingly without reason, and the salesman offers her a "hell of a deal." Buffy later visits Faith's rundown motel room to invite her to Christmas Eve dinner, denying that it was Joyce's idea. Faith claims that she has plans, though Buffy knows she's lying. She doesn't push the issue, instead leaving the offer open.

Angel's nightmares continue to haunt him, and he finally resorts to going to Giles for help. Wary of Angel and still bitter over Jenny's death, he keeps a loaded crossbow in hand while Angel questions why he's back on Earth. Their conversation is cut short when Angel sees Jenny's ghost and runs off. Giles turns around, trying to get a glimpse of what scared Angel off, but he doesn't see anything.

In another one of Angel's dreams, he attacks a maid at a Christmas party. As he finishes her off, he looks up to see Buffy in his dream. They both wake up, realizing that they're literally in each other's heads. Buffy goes to Giles, and they plan to research the force that has overtaken Angel. Xander offers to help, partly to make up for being such a bad friend to Buffy, partly to cure winter break boredom. Willow joins in and the gang research for hours with no luck. Willow tells Buffy that she is trying to think of a way to let Oz know she's truly sorry, and Buffy suggests that she needs to let Oz know he comes before Xander.

Angel is still unable to sleep and encounters Jenny's spirit at the mansion. He tries to apologize, but she doesn't want to hear it; she just wants to make him suffer. He is visited by the many ghosts of his victims, including Daniel and the maid he killed. Finally, nearly crazy from being reminded of what a monster he was, Angel begs for it to stop. Jenny offers him comfort and tells him to rest. At the library, Buffy also falls asleep, joining Angel in his dream. This time, the two are making passionate love on Buffy's bed. Looking over his shoulder, Buffy notices a creature with its eyes sewn shut just before Angel changes into a vampire and bites her. They both wake up. Jenny's spirit tells Angel he needs to kill Buffy.

Giles has found out that the force taking over Angel is called The First. It's very powerful and impossible to kill. However, the three priests, eyes sewn shut, are creatures which Buffy can kill, hopefully putting an end to Angel's mental torment. Buffy and Xander visit Willy the Snitch, though he is not much help, as all he knows is that The First may be underground. Oz arrives at Willow's house with videos from Big Lou's and finds she has a romantic night planned, including a provocative outfit, candles, music, and chilling champagne. In a roundabout way, she implies that she wants to make love with Oz. He tells her he's not ready to take their relationship that far, and that she doesn't need to prove herself to him. She's fine with his decision, and they kiss.

At home, Buffy and her mom are trimming the tree, and they both get a surprise when Faith shows up. Buffy goes upstairs to her room to find that Angel is there waiting for her. Desperate to clear his mind, he fights the urge to kill Buffy. Jenny, unseen and unheard by Buffy, continues to goad him into killing her, and as a result, a frantic Angel jumps headfirst out the window. Buffy is worried, and she leaves Faith in charge of watching her mom while she goes to Giles for immediate help. At the mansion, Jenny continues her quest: she tries to convince Angel that he must kill Buffy and, as long as he is alive, she will be at risk. With that, Angel resolves to commit suicide by sunlight instead, which Jenny says wasn't the plan, but it would nevertheless be acceptable.

After some more research, Buffy discovers that nothing will grow above or below the priests' location, and she is reminded of the dead trees at the Christmas tree lot. Before she departs, Giles warns her that she may have to kill Angel again should he truly become dangerous. She goes to the lot, and in the middle of a circle of dead trees, she digs a hole right above the priests' hideout. She jumps down, tearing the place and the priests apart, and encounters the First in Jenny's form. They attack each other verbally, and Buffy runs off to the mansion to save Angel from killing himself.

She finds him atop Kingman's Bluff, the sun only minutes away from rising. He tells her that he loves her and wants her so much that he'd be willing to lose his soul just to be with her. Buffy desperately wants him to come inside, but he believes wholeheartedly that he is evil and he has to die. They fight, hitting one another, and then, with tears in their eyes, say how much they love each other. Buffy gives him his last chance to prove how strong he really can be and to come in from the sun. She tells him that if he really doesn't have a place on Earth, he can burn. Suddenly, out of nowhere, snow begins to fall. The once sunny, warm Sunnydale is now dark with a Christmas Day snowfall.

Willow, Oz, Giles, Faith, and Joyce all watch the snow outside their windows. Although in different places and different moments in their lives, they are united by wonder at the unusual weather. Buffy and Angel walk hand in hand together through the snow, both of them enjoying Angel's now quiet mind. 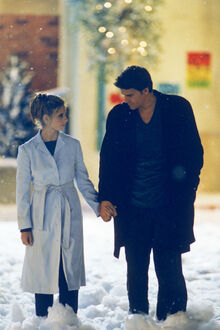 Joyce: "You know, honey, I was thinking - maybe we should invite Faith to spend Christmas Eve with us?"
Buffy: "I'll ask her. Worst she can do is - well, the worst she can do is serious bodily harm, but she'll probably just say no."

en:Amends
Retrieved from "https://buffy.fandom.com/wiki/Amends?oldid=209776"
Community content is available under CC-BY-SA unless otherwise noted.