"All the Way" is the sixth episode of the sixth season of Buffy the Vampire Slayer and the 106th episode in the series. Written by Steven S. DeKnight and directed by David Solomon, it originally broadcast on October 30, 2001 on UPN.

In a quirky and erudite episode, a sudden announcement sends the Scooby Gang into celebration mode on Halloween, but plenty of frights come to light when Dawn disappears. Anya, who has been bugging Xander to announce their engagement for months, finally gets her wish. After Xander drops his bombshell, Buffy and company throw a party for the couple. Only then do they realize that Dawn has sneaked out with a friend. Out on the town, the younger Summers winds up meeting a teen who craves more than just mischief.[1]

It's Halloween, and the Magic Box is enjoying its busiest day ever, to Anya's delight. Xander goofs around pretending to be a pirate, Dawn looks for stuff to take, Anya roller-skates around selling things, while Willow argues with a woman who is dressed as a stereotypical witch. Buffy runs into Spike in the basement, and the two have an awkward conversation in which Buffy thinks Spike is trying to get her into bed, but then he clarifies that he wants to go patrolling with her that night, notwithstanding the fact that supernatural forces typically don't operate on Halloween. The gang, who have been helping out all day, are worn out. Anya dances with Dawn as she counts her money. Xander looks at her, and decides that the time has finally arrived to announce that he and Anya are engaged. The gang wishes the couple well but privately share their concerns with each other. As Anya gushes about wedding plans and being married, Xander starts to look uncomfortable.

The gang throws an impromptu party at Buffy's house for the two. When the lack of decorations is mentioned, Willow uses a spell to fill the room with them. While Anya is grateful, Tara and Giles share a concerned look.. Later in the kitchen Tara tries to talk to Willow about her casual and increasingly excessive use of magic, while Willow fails to see anything wrong with doing so. Dawn reminds Buffy that she is spending the night at her friend Janice's house. After Buffy approves, Dawn heads out to meet Janice for what is actually planned to be an evening of Halloween fun and teenage hijinks with two older boys named Zack and Justin.

As Dawn, Janice, Zack, and Justin engage in some of the more violent Halloween pranks, breaking windows and damaging mailboxes, back at Buffy's place, Giles and Xander share a drink and talk about Xander's future. Xander almost seems to second-guess his marriage intentions and his future. Giles assures him that everything will be fine.

Dawn and friends find themselves in front of Old Man Kaltenbach's house, Kaltenbach being reclusive and subject to rumor. After Janice refuses to approach the house, Dawn then bravely volunteers. As she lifts his pumpkin to smash it, the old man grabs her. Dawn's pals quickly rush her aid, but they are cheerily invited into the house. As it turns out, the man was actually a toy maker who is merely bitter about his toys becoming obsolete. Justin offers to help the old man with his special treat in the kitchen. As he prepares rice crispy treats for the kids, Justin vamps out, kills the old man, and steals his wallet. Zach and Justin debate whether to just eat Janice and Dawn, or turn them into vampires, too. Justin gives Dawn $10—her portion of the money stolen from Kaltenbach, which she accepts without hesitation. Justin is impressed when Dawn tells him she has been stealing for a long time.

Janice's mom calls Buffy's house and Giles figures out that Dawn has tricked them. He goes off to find Buffy; Anya, and Xander mind the house; and Tara and Willow head for the Bronze. Zack steals a car by killing the driver and the four teens begin making out. Janice and Zack then take off, leaving Dawn and Justin alone in the car. Justin then takes the opportunity to make his move and deliver Dawn her very first kiss.

At the Bronze, Tara and Willow get into a fight when Willow proposes to magically shift everyone who isn't a 15 year old girl old into an alternate dimension to make Dawn easier to find. After Tara calls Willow out, Willow gets very angry and accuses Tara of taking Giles's side.

In Zack's stolen car, Dawn and Justin continue to make out. However, after Justin nibbles her lip a little too hard, he vamps out. Although Dawn is swept away in the moment, she manages to feel his lumpy noggin. Nearby, Buffy smashes the door in on Spike's crypt. He informs her of Dawn and her antics. Buffy grabs a pistol crossbow out of his weapons chest.

In the cemetery, Giles hears a girl scream and races to save her, thinking it's Dawn. Instead, he finds Zack and Janice, just as Zack pulls his teeth out of her neck. Zack calls Giles "grandpa" and tells him Janice was asking for it. The Watcher scoffs that he's certain she was not, and then dusts him. He continues to look for Dawn.

Meanwhile, Dawn has just run out of the car to get away from the vampire. He stops her, telling her in an unconvincing monotone that she's different from other girls; he could tell when he first met her that she was special. As he leans in to bite her, he says that it's OK and that it will only hurt for a second. At that moment, Giles finds Dawn and tells her that Justin says that to all the girls. As Giles approaches to fight him, a crew of vampires, surround them.

Just then, Spike and Buffy also arrive on the scene, and Buffy turns into her mother as she criticizes Dawn for parking with a vampire. Dawn protests that she didn't know he was a vampire; they'd just met. Buffy counters angrily that she shouldn't be parking with a guy she just met, and Dawn protests that Buffy fell in love with a vampire. Then, an all-out Halloween battle breaks out. In the battle's conclusion, Justin finds Dawn, knocks her down, and straddles her. She says she thought he really liked her. He says he does, then leans in to bite her. But Dawn dusts him with a crossbow arrow she was holding at her waist.

The gang return home, where Buffy is quick to leave the job of chastising Dawn to Giles, who is unhappy about how Buffy is relying on him so much. Meanwhile, Tara is still angry at Willow, so Willow casts a spell on Tara to make her forget their quarrel. 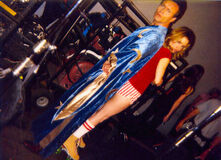