A Nice Girl Like You (also known as Food Chain, Part One) is the twelfth issue of the Buffy the Vampire Slayer Classic series. Written by Christopher Golden and illustrated by Christian Zanier, it was originally published on August 18, 1999 by Dark Horse Comics.

The new girl in Sunnydale, by all appearances, is your typical sweet, intelligent high-school senior, except for one thing — the crowd she runs with! She hangs out with more punks and delinquents than in juvenile hall, yet Buffy still finds something… different about her.[1]

Golden foil exclusive
Add a photo to this gallery 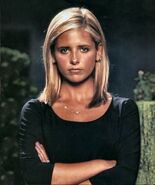 Retrieved from "https://buffy.fandom.com/wiki/A_Nice_Girl_Like_You?oldid=235868"
Community content is available under CC-BY-SA unless otherwise noted.