"A New Man" is the twelfth episode of the fourth season of Buffy the Vampire Slayer and the sixty-eighth in the series. Written by Jane Espenson and directed by Michael Gershman, it originally broadcast on January 25, 2000 on The WB network.

ANOTHER BUFFY BIRTHDAY DEBACLE — Buffy and Riley explore the extent of each other's powers as they become more romantically entwined. Feeling left out these days, Giles turns to his old buddy Ethan Rayne for camaraderie, but Giles must rely on an unlikely source when he is transformed into a demon and mistakenly hunted down by an unknowing Buffy.[1]

Riley and Buffy are making out on her bed, but before it gets too serious, Willow barges into the room and tells them of a demon attack. Armed with weapons, they go to the library only to find that it's a surprise party for Buffy's 19th birthday. At the party, Giles feels out of place, especially when Buffy introduces Riley as her boyfriend, and he starts asking Giles about what he does now that he's out of a job since the school burned down. Buffy gushes about Professor Walsh and how she's "the smartest person she's ever met" and that she wasn't invited to the party because "she's got better things to do than hang out with a bunch of kids."

Now able to hurt and kill demons, Spike packs his things as he moves out of Xander' basement. Professor Walsh is informed that Buffy is the Slayer. After revealing Riley's 17 captures and kills, he inquires about how many "hostiles" Buffy's killed, but Buffy keeps quiet to avoid bragging. Giles discovers a powerful demon, Barvain, is about to rise, and calls Buffy, but Willow informs him that she is with Professor Walsh. Buffy gives Riley some details about her history of slaying and he's incredibly intimidated, but impressed. Giles goes to talk with Maggie Walsh about Buffy, but is offended when she says that the lack of a father figure in Buffy's life is a problem.

Willow and Xander go with Giles to the cemetery to find the demon. They are very late and fail to find Barvain. Instead, they find the area incredibly clean, which Willow suggests is the work of the Initiative. She and Xander go on about how thorough the operation is, only to discover that Giles never knew about the Initiative or that Riley and Professor Walsh are behind it. Again feeling incredibly out of the loop and unwanted, Giles sends Willow and Xander away, offering to stay in case anything happens, but after a few seconds realizes it's utterly pointless and dejectedly leaves. Ethan Rayne walks out of the shadows, speaking of interesting things to come, only to be caught when Giles re-enters the mausoleum.

Giles prepares to beat Ethan, sparing him only after Ethan's hastily uttered promise of information. Going out for a drink, Ethan tells Giles that the underworld is being threatened by the Initiative, especially by something called "314." Whatever the Initiative is doing, it's throwing everything out of balance, and the underworld fears it.

Buffy and Riley spar together, both holding back at first until they decide not to, even though Buffy still holds back "a little." Buffy kicks Riley hard enough to send him flying across the room. Meanwhile, Giles & Ethan get very, very drunk, with Giles opening up about how left out he feels and his annoyance that the Initiative have the demons running scared when he'd been fighting evil for 20 years, and Ethan flirts and gives his number to their waitress. Willow and her new friend Tara meet to practice magic and a simple magical exercise to float a rose goes awry, causing the rose to fly wildly around the room, like a "rose-guided missile."

When he wakes the next morning, Giles discovers he's been transformed into a horned demon with incredible strength. First trying to make a call, he breaks the telephone receiver, then breaks the door off its hinges as he tries to leave the house. At breakfast, Willow lies to Buffy about where she was, saying she was practicing magic alone. She does mention that some magical force interfered with the spell she was attempting to cast. When Willow tells Buffy how "left out of the loopy" Giles has been feeling, Buffy realizes that she never told Giles about Riley and the Initiative. Giles goes to Xander's basement and tries to get him to help, but when Xander wakes up, he doesn't recognize and cannot understand Giles, who is speaking in the demonic Fyarl language. Xander starts to throw pots and pans at him and Giles runs away.

The gang finds Giles's place destroyed, and are worried that the same demon that went to Xander's was responsible for hurting, or even killing Giles. Finding Giles' ripped clothing on the floor, Anya Jenkins opines, "I think he ate him." Walking through Restfield Cemetery, Giles runs into Spike. Spike recognizes Giles, and identifies him as a Fyarl demon. Because he speaks the language, Spike agrees to help find Ethan and fix things, for cash. Riley shows up at Giles's apartment where everyone is researching the demon. After finding the demon in Giles's books, they determine it can only be killed with a silver object.

Spike tries to figure out how to drive Giles's car while telling Giles of his experiences with Fyarl demons. Upon spotting Professor Walsh, Giles makes Spike stop the car so he can chase her down the street in return for her comments in their last conversation. Spike gets information out of the waitress that Ethan flirted with, and finds out where he lives. Breaking into the magic shop, Buffy finds a receipt for materials purchased by Ethan. While trying to escape the commando vehicles chasing after them, demon Giles jumps out of the car while the commandos continue their pursuit on Spike. Spike later crashes the car while trying to get away.

Demon Giles charges into Ethan's motel room, and attacks him. Buffy and Riley arrive on scene and while Riley takes care of Ethan, Buffy fights with demon Giles. With a letter opener she took from Giles's place, Buffy stabs the demon, but then she looks into its eyes and realizes that the demon is Giles. Fortunately, the letter opener turned out not to be made of pure silver. Giles is turned back into a human with a spell and Riley arrests Ethan. While Giles goes to watch Ethan get put away, Buffy and Riley talk about her abilities again. Buffy later apologizes for not telling Giles about Riley and the Initiative, but Giles is worried about her safety and whom she trusts. Professor Walsh is upset that Riley disobeyed orders for Buffy, but says she thinks that Buffy will "work out." Passing through security doors, Walsh enters a room labeled "314."

"Well, we felt that Giles was a little bit underserved at this point in the season and wanted to give him something to be doing. It's always fun to have Ethan Rayne back in the mix. Really, this is Giles' mid-life crisis episode. It was the first time that we got to deal with a metaphor that was that adult, not teen-orientated at all, and quite a bit of fun. […] There were a couple of ideas kicked around. We were talking about a portal. We were talking about him becoming younger, him becoming older, him kind of recapturing his youth by becoming — I don't think seriously — but I know Jane Espenson was kicking around the idea of getting teenage actors to play teenage versions of Giles and Ethan and to have young Ethan try to seduce Buffy. That was an intriguing idea but ultimately we went with a pretty straight-on metaphor of his questioning himself in the middle of his life and he's turning into a monster."[2]

Riley: "Oh, I know how that is. My dad was out of work a while back. He sells farm equipment. It was rough."

Spike: "I can kill demons! I can crash cars!" (He runs off into the night.) "Things are looking up."

Giles: "Embarrassed mostly. Buffy, I don't know what to say. You know I'd never intentionally—"
Buffy: "I know. I'm so sorry about, you know, stabbing you in the heart..." 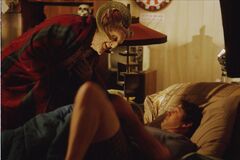 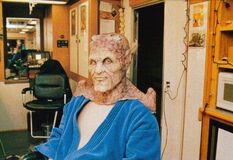 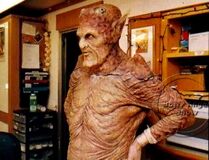 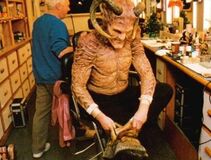 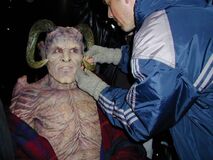 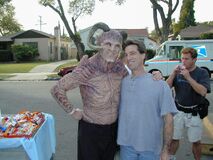